Forgot to note the peg number, we were using our own for this club match. I drew peg 10 so must have been around permanent peg 25. 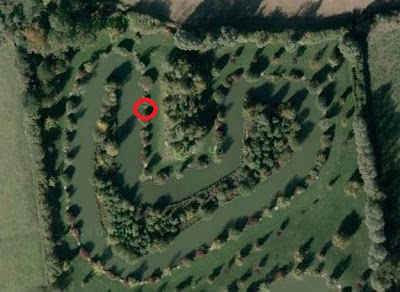 In the past I have struggled on this lake. I have found getting the feed right the most difficult thing. I don’t get on with the fishery pellets. They just don’t seem to work for me. But cat meat seems to work at Holly so I tried a slightly different approach and something I had not done before having overheard a comment from another angler during my last match at this venue.

I have tried liquidising corn and using that to attract fish into the swim with limited success. This match I liquidised two tins of cat meat (tuna) and diluted that up to six pints stored in a milk bottle. I also took the same volume of liquidised corn. Other baits would be corn, krilled meat (6 mil cubes), some leftover worms, expanders for the hook, band-ums for the feeder and some green hooker pellets. I also had half a bag of fishery 2 mils.
Holly are gradually tidying up the pegs and removing some of the restrictive vegitation that has been allowed to grow. My peg hadn’t been done so on arrival it was out with the secateurs to make the margins accessable. Ten minutes cutting and I had a left margin that was easy to fish and a right where I had to lift over a large clump of rushes to fish through a gap between them and the adjacent bush.
My plan was to fish the Method feeder across, a full depth pole line at 2+3 and the two margins. Fishery green groundbait on the Method with either corn or Band-um on the hook. Last match on Trotters at Holly Farm it was the strawberry buoyant version that did the damage and so would be my starting point today. The deep pole line would see the 2 mils with corn slop fed to the right margin and cat food slop to the left dropping a few cubes of meat over the top.
On the feeder to start and I had an early F1. Castin was a little tricky due to an overhanging bush but if I got the cast in the right space the tip would go round. After an hour I had around five F1s for approximately 7 pound. This line slowed and so it was onto the deep pole line with meat or corn on the hook. A few pecks at the bait by small fish and a few bubbles showed but no fish. The bubbles looked like those I get on my club lake when carp arrive so I persevered for a while in the hope of fish eventually settling. It didn’t happen.
Tried the margins that I had been feeding regularly and despite again the odd peck at the float and an occasion tail swirl I got nothing from either side. Back on the feeder and I added another two small F1s switching baits between corn & Band-ums. Recycling through the pole lines brought me one fish from the deep line on corn. I was up to eight fish and around twelve pound. Word up the bank was that everyone was struggling but there were two excellent anglers on the end pegs.
The feeder line died totally and even casts that impressed me didn’t produce a fish. With two hours to go I had to make a decision, pick one line and make it work. I chose the left margin.
I was feeding at an easy topkit+1 in around 18 inches of water. The occasional tail swirl, particularly immediately after feeding the slop is what convinced me to stay on this line. I just had to work out how to get the fish to take my hookbait which up until now had been ignored. Made two changes – I used a whole worm and then, instead of dragging the rig up the slope I laid it parallel to the bank. This produced my first margin fish, an F1 of around 2lb. Frustratingly that wasn’t followed so I changed bait to corn and a smaller hook/hooklength combination. I had been using my heavy hooklength of 0.17 with an 18 Fox Match Carp 2. I was now on 0.13 to a 16 B611.
This seemed to do the trick along with positioning the float, still laying out along the bank, about two foot past where I was feeding. I was having to be patient for the bites but every now and then the float dipped and I was into a fish. Mostly f1s between 1 & 2lb but twice snared a proper carp, one at around 5, the other 7 that didn’t fisht at all and was in the net within ten seconds.

The bites were unusual for margin fishing in that I had to react to any slight dip. This with at least 4 inches of line on the deck, probably more. I was using a small dibber, something I have adopted over the last year in swims under 18 inches deep. More difficult to read than a bristled float but less obtrusive and thus not spooking fish in shallow water.

Ended the match with an estimated 35lb. Peg 1 (our pegs not permanent) produced 80lb, peg 3 – 53lb. By the time the scales reached me (11 out of 15) it still looked like my 35 might place me third. Scales gave me 41lb 5oz and definite third but with still four, including the other end peg to weigh. Luckily it seemed that the high numbers fished hard and peg fifteen put 37lb on the scales. So my third was secure. Thank goodness for those two bonus proper carp.

On a roll now! Last two matches, both at Holly have seen me get a 1st & 3rd. Onto Toft and Bucko’s four a side.

Toft Farm, Carp Lake, Peg 28
The day started badly and didn’t get any better. Waited 55 minutes to get served breakfast at the Willoughby cafe (Netty’s) and left there six minutes after the published draw time. Not a good start for a team captain. Teams of four drawn randomly.
My team had drawn and I was left/allocated peg 28. This didn’t fill me with confidence as this part of the lake can fish hard. And over breakfast I had been told that the lake hadn’t been fishing well anyway.

Normally at Toft in the Summer I can rely on a few fish appearing in the margins. Also fishing quite short straight in front can work. So I set up rigs to fish at +1 and +2 as well as tight to the reeds in the margins to the left and under some overhanging grass. Started on the pellet feeder having fed the pole lines. Nothing on the feeder after half an hour, not even liners. Not just for me but everyone around me was struggling. A few silvers were coming out but no carp. A switch to the pole didn’t improve matters as I had no indications on any lines.

Back to the feeder and a few casts with different baits still didn’t produce. Another look around the pole lines and despite a few indications of silvers nudging the line/shot/bait the float refused to sink. This went on for the first three hours. I did try moving my margin swim further out to the bottom of a small shelf around two foot from the reeds. I did have one bite here but no fish. Time would tell that I perhaps didn’t go far enough. Also in this time I did witness one silt cloud from the margin on the left but this proved to be a false dawn.

Eventually it dawned on me that I needed a plan Z. out came my spare feeder rod and I rigged that up to fish the pellet waggler. There had been some swirls on the surface and I had seen one carp caught on this method.

After a few casts and catapulting pellets the float buried and I was into my first fish. Only a small carp of around two pound. The hook pulled as I was guiding it to the net. Still it looked like a plan.

About half an hour later and at last I had a small carp in the net. Another thirty minutes and another joined it. Not hectic action but at least something to weigh. This then went dead, had it ever been alive? So another go round the pole lines and still nothing.

Pellet waggler for the last thirty minutes and with three to go I had another small carp. Total weight 7-05 and fifth in section.

Do you want to know the perfect gift for athletes who have everything?