Introduction:
You can be sure when a company like Daiwa Japan introduces a new reel, there will be an endless amount of anticipation surrounding this reel’s debut. Add to this, news that the new reel will be replacing the company’s most respected, and widely popular flagship reel, the TD-Z 103M and look out: every picture, tidbit of information, etc. will be scrutinized until the very moment the reel is available for purchase. What happens when this much anticipated moment arrives? You can be certain TackleTour will be right in the middle of the fray to help you make heads and tails of it all. Introducing our review of the much anticipated Daiwa Japan TD-Z replacement, the Daiwa Steez Baitcaster. 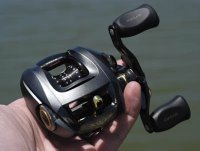 Impressions:
Definitely the first thing that strikes you with this reel is its weight or lack thereof. Our Steez weighed in at a mere 5.5 ounces out of the box. That makes it lighter than the Pixy! The second thing that struck us was Daiwa’s unabashed stamping of the reel’s name in every spot imagineable around the frame, handle, and sideplates. You’d have thought they were selling ad space on their reels to help pay for the retooling they underwent in order to bring this reel to market. Looking past all that, perhaps the most astonishing surprise was, once we opened up the sideplate, our discovery that the reel’s spool had an all too familiar looking rotor. It is the same rotor as that of our 2004 Limited Edition Type R+ and Custom TD-Z’s! Daiwa has apparently, finally made use of the R&D efforts that materialized in their limited edition reels to bring to market, a full production reel with many of these same features. 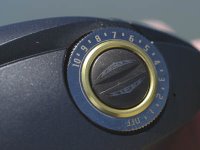 Just prior to the arrival of my Daiwa Steez, I received shipment of my custom rod order from Matt Davis of Otterods. This rod is a custom wrapped Shikari PMB703 SHX featuring spiral wound Fuji titanium framed SiC guides, a split rear, hypalon grip, and plenty of very fine detailing. I’d been switching back and forth between some of my custom TD-Z’s and a supertuned Shimano Metanium MG. When my Steez arrived in the mail and I held it in my hand, I knew exactly on which rod this reel was destined to land. Unfortunately, I had run out of my supply of 14lb Sunline Shooter FC, so I spooled the reel with 10lb Yozuri Hybrid. I was able to spool roughly 100yds of this line on the reel. 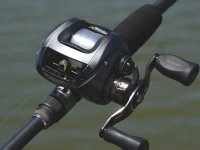 Are you one of those who would absolutely love your Daiwa Pixy were it not for its finesse drag or shallow line capacity? Do you love your Alphas Ito Ai but wish it had the clicking drag adjustment and spool tension knob? Did you miss the boat on the 2004 Limited Edition Type R+ reel and wish you could still get one – easily? Have you been wondering, why doesn’t Daiwa just make a regular production reel with the Type R+ tuned rotor? Well, I’m sorry to have to tell you this, but the Daiwa Steez just may be the answer to your dreams. 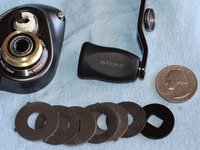 While I made no official comparisons during this test between the Steez and the Daiwa Pixy, I can say the Steez, because of it’s ultra-light weight and Type R+ tuning performs reminiscent of the Pixy. In fact, with the casting brakes set at a medium setting, I had to use an ample amount of manual guidance (i.e. my thumb) to control the spool during test casts with a 1/4 oz plug on my Shikari PMB703. I was able to launch this 1/4 plug in excess of 100 feet with a simple roll cast! 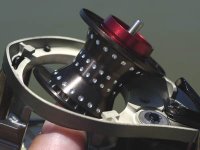 Retrieve: The question here, before ever taking the reel out on the water, was whether or not Daiwa has changed the feel of their reels. The answer, at least for the brand new Steez? No. While admittedly, a very smooth reel, given the full Air Metal (magnesium) construction, the reel still has a slightly hollow feel to it while turning the handle on retrieve, reminiscent of the TD-Z. This is not all together bad as the feeling of connection between yourself and the lure, that this reel affords, is indeed reassuring.

Daiwa Japan has promised big things with this new drag system on the Steez. The primary complaint many current and former owners of the TD-Z had was the reel’s questionable drag. If contaminated with oil, the former drag system becomes very inconsistent – studdering off and on, instead of providing smooth consistent performance. So what changes did Daiwa Japan have in store for the Steez? We took ours apart to investigate and what we found were instead of the pliable, kind of rubbery compound used in the previous generation drag washers, the Steez sports a stack of metal and new, grit-like, fibrous washers that provide a much different feel than the old TD-Z. Startup is indeed quite good, and performance during battle, while consistent, has a very unique feel that is difficult, even for me to describe. You can definitely feel the washers going to work as the reel vibrates, ever so subtly in your hand when a fish goes on run and pulls on your drag. It’s a feeling much akin to installing the aftermarket Carbontex washers dry. The new system is a definite improvement.